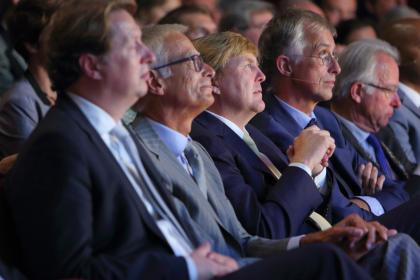 moderated its celebratory event at the Diligentia Theater in Den Haag at the beginning of October.The event looked back on the organisation’s 50-year evolution from a development aid volunteers agency run by the Dutch government, to in 2015 a self-financed development aid organisation focused on agriculture, renewable energy, and water, sanitation and hygiene. And it featured a debate led by Emma Robson that looked at the ideal development aid model of the future. The event was well attended and guests included His Royal Highness King Willem-Alexander and Jozias van Aartsen, Mayor of The Hague.